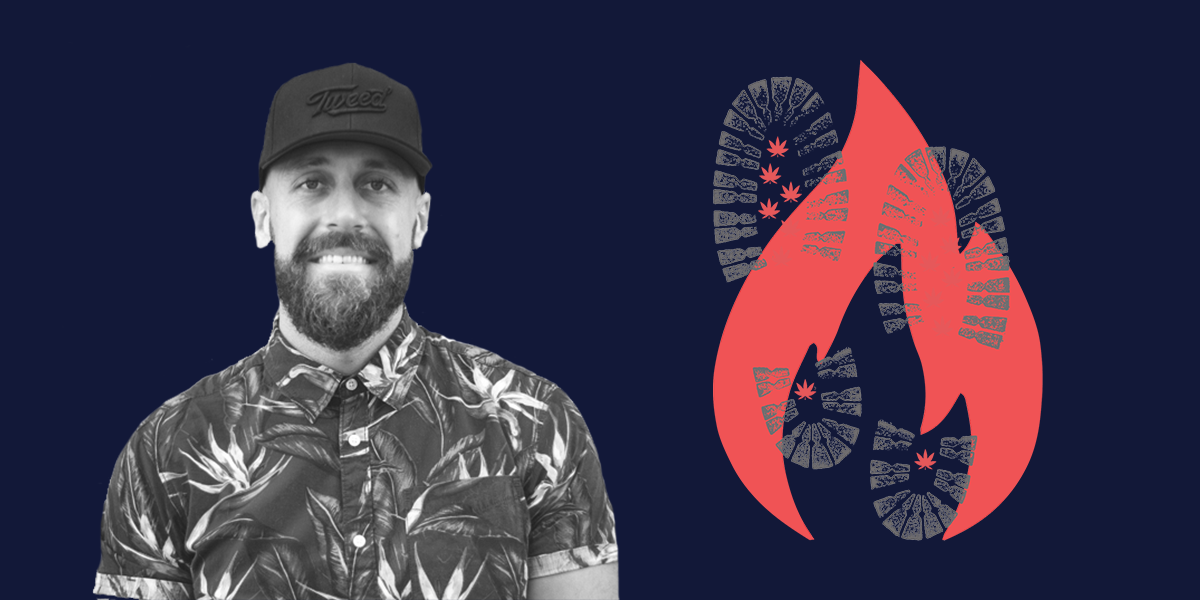 Trailblazers with Michael Wilson of Greener

This week’s Trailblazer is Michael Wilson, previously an SEO & Digital Product Manager at Canopy and founder of Greener, an SEO and content strategy business.

Questions with a Cannabis Marketing Trailblazer

When did you first become involved in the cannabis industry and why?

Yeah, so I started in SEO back at my first agency job with SDI marketing, an event/experiential agency. I got an internship there out of my postgrad program at George Brown where I did the sports marketing program. Because I came from Western with a history of psychology degree and I was like, well, I’m not getting a job right away with this, so I need to do a post-grad. At SDI we kind of jumped around from a couple of different projects, worked on road hockey to conquer cancer events, which was really cool.

Then I joined the Mountain Dew experiential team and we were running some fairly big events, like cross Canada events and then some really big events in the city. For example, we brought in J Cole to do a free concert to cap off two days of skateboarding and BMX competition for amateur riders. As a part of that, we had landing pages that we were running to try and draw traffic to and registrations and a big part of that was learning about SEO.

So I started looking into ways to increase the organic visibility of those pages and that’s kind of where I got my feet wet with SEO and then I kind of wanted to move on from the Mountain Dew side of things. As much as it was a really fun thing, I just didn’t think selling Mountain Dew to kids was the thing that I wanted to do for the rest of my life. I wanted to dive into digital marketing SEO, but a bit more.

”I saw the digital marketing manager role come up for Tweed with Canopy in Smith Falls and I was like, holy shit, this is the coolest job ever.

I grew up 30 minutes away from Smith Falls, so it was a really cool, full-circle kind of event. Knowing kind of what was happening with cannabis, it was still a time when the regulations for recreational cannabis wasn’t a certainty. It was heading in that direction, but it was still medical and it still faced tons of stigma, which it still does.

Because of what Canopy stood for, the passion that it kind of gave me about cannabis, and obviously for me, it wasn’t just a job opportunity. I mean, it was, but cannabis is something that I genuinely care about and increasing access for people medically that need it because it is a truly beneficial thing.

What has been the biggest marketing challenge you have faced when working with cannabis companies/brands?

It’s the ever-changing regulatory environment and it’s not necessarily a bad thing. I think it makes sense that the government came in and was as restrictive as possible with cannabis, in terms of the types of laws and the types of acts that they built, because it’s easier to come in and be really restrictive and then loosen that over time as opposed to making things sort of loose and carefree and then have to come back and retroactively tighten your grip on things. It’s just way easier to start strict and loosen things over time.

That’s one of the things that kind of keeps you on your toes, is that one-week cannabis delivery and curbside pickup isn’t a thing and then something like COVID comes in and it totally flips the industry on its head. I think the regulatory environment is definitely a challenge, but with it being that way, it teaches you to be agile about what you’re doing, especially digitally.

”There's all sorts of things that I wouldn't want to reveal because they are sort of competitive advantages for the way that I work with clients.

But, yeah a very strict environment has been a challenge and it has taught me to kind of think on my feet in terms of the types of recommendations that I’m making about where I think people should be advertising.

I think the nice thing from an SEO standpoint, is that there really aren’t any restrictive regulations. You certainly have to be mindful of what you’re talking about with licensed producers that are legally compliant because you can’t just write about anything as a licensed producer and then throw it online and expect health Canada to be cool with that.

If you’re an LP, you have to pay really close attention to education, everything should be grounded in education and if you can find ways to sneak in hyperlinks to products, that is potentially a way to go about things, but, you need to be really well versed. I think that’s a core person to have on anyone’s cannabis marketing team, somebody that gets it from a legal and regulatory standpoint.

If you could change one of the current Canadian or American marketing restrictions on cannabis, which would it be?

So for me, it would be packaging. I think it would be far more appealing for people and it would really help with things like brand preference and just understanding the differences in products.

I think products are so similar right now in terms of packaging, whether you’re shipping it in a tin or you’ve got it in bags. To me, just from one product to another, it all looks so similar and it just creates this environment where everything seems the same.

It’s obviously a much bigger conversation, but I would love it if there was more flexibility in lowering the size of warning labels while still maintaining them, and not having them occupy such a massive percentage of the product.

”We're dealing with something that's psychoactive, but not nearly as potentially damaging as something like alcohol, but where are the warning labels on alcohol?

I think I slowly want to see the marketing regulations in Canada shift more towards how alcoholic beverages are marketed. Right now they’re closer to tobacco, which doesn’t make as much sense. With this new line of edibles and cannabis 2.0, I think it makes more sense to start looking at things, from an alcohol marketing standpoint.

In your observation, what marketing techniques or channels have been most effective for cannabis companies looking to connect with consumers?

Search Engine Optimization is by far, in my opinion, the most effective channel. In the last couple of years, this is just looking at the last two fiscal years at Canopy, but $28 million of our revenue was driven by users who came in from organic search. So finding the site in organic search and then coming to the site and converting.

Not only was it driving the most revenue, but it was driving the most traffic on the site. They were also more likely to spend more time on the site. So with higher time on site and lesser bounce rate, people who find your site through search are just higher quality visitors and that’s proven in basically any industry that you want to look at.

”If you have a website in cannabis, you should be investing in SEO, but don't expect it to be an immediate return search.

It’s helpful to have someone dedicated to search because Google’s algorithm is constantly changing. It’s constantly changing because all it wants to do is serve users the best possible search experience. It wants to make sure that if you’re using Google, you’re going to find the information that’s going to keep you coming back to Google.

Google is by far the industry leader when it comes to how the algorithm is built. They’re making over 400 updates a year, some of those updates to the algorithm are bigger than others, like RankBrain which helps understand semantic search more clearly and really makes it interpret content more like a human and other updates are tiny and small and not as worthwhile.

It’s sort of like not getting all worried that your site’s going to be penalized. But that’s my spiel about why SEO is important and the other things that are really valuable for you are any age-gated environment that you can get in front of people, just because of how the regulations work in Canada, allows you to do a lot more and talk about products, show flower, quality, show bud, and show products.

So as many age coded environments as possible and SEO are two of the most important areas to me for brands to be present digitally.

Are there any other Trailblazers in the cannabis industry that you follow?

Yeah, for sure, the person who opened the door for me and weed was my boss. She’s no longer with Canopy, but Amy Wasserman came over as a part of the Metrum team back in the day that helped stand up the color labeling system that Metrum used that now Spectrum uses as a foundation of literally what they do.

I mean, Spectrum literally represents the spectrum of colors that they categorize all products into. So that was just an amazing piece of branding and she came over in that Metrum deal to Canopy when they were acquired. We worked on some amazing projects together, and additionally, she’s just such a positive, funny person along with being an amazing marketing mind. So she’s always someone that I stay in close and close touch with and look for opportunities to work together with her on.

Abby Roach is another one. She’s at the OCS now but was the founder of the Hotbox Cafe. which was in Kensington for the longest time and I think it still is. She got me connected with a Hotbox in Jamaica, which is no longer operating, but I was there on vacation for a wedding, and it was amazing to see her establish that kind of brand down there and work with amazing local people to bring great flower.

Also, Bruce Linton obviously is someone that I just love his personality and his approach to things. He was a technology guy before coming to Canopy, but his approach to building things locally and working with local people was really cool. When Canopy was expanding the beverage and the bottling facility, in Smith Falls, he was just so laser-focused on growing Smith Falls locally, because that was his mindset wanting to help it and grow the people around him.

What is one tip or piece of advice you would give to marketers looking to enter the cannabis industry?

I’d say be mindful of the fact that right now the cannabis industry is going through a period of transition. There was so much hiring going on that I think obviously with some of the downsizing that’s going on is unfortunate, but it is a part of doing business. Do a lot of research about the companies that you’re potentially looking at entering.

I think going into digital is a really smart thing right now, because of COVID a lot of people who never normally would have purchased online or done things like curbside pickup have been given this forceful push into digital marketing and eCommerce.

A big thank you to Michael for participating as this week’s Trailblazer! Stay tuned for another interview with a cannabis marketing Trailblazer next Thursday in the ADCANN blog.

Trailblazers with Jeff Goldenberg of Abacus