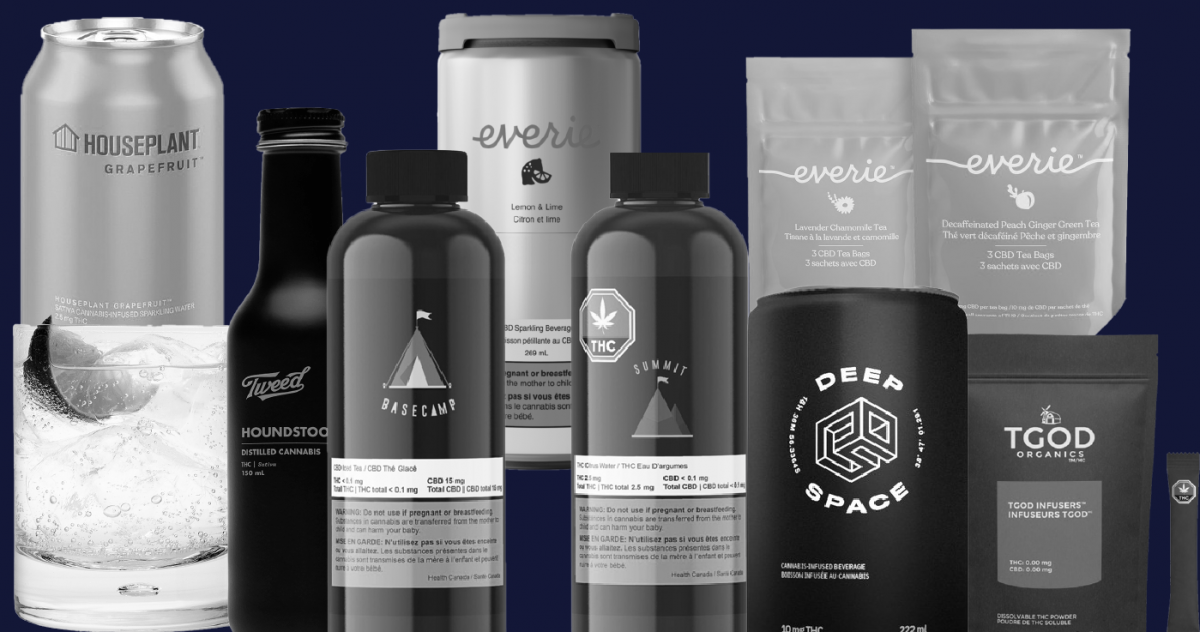 In the second installment of our Analyzing The Canadian Cannabis 2.0 Market series, we take a look at a highly coveted and controversial product segment – beverages.

Even several years into legalization in regulated U.S. states, infused drinkables only account for around 2 to 3% of recreational cannabis sales. However, some analysts and executives predict that the cannabis beverage market will expand to 20 or 30% of all sales in North America.

Certain Canadian licensed producers such as the Canopy Growth Corporation (who you will see several examples from) and HEXO have bet a lot of their business on the popularity of cannabis beverages in Canada. Molson Coors and HEXO partnered in Canada and recently expanded that partnership on a new venture to produce hemp-derived CBD beverages in Colorado. Another giant alcohol organization, Anheuser-Busch InBev, invested $50 million toward a similar partnership with Tilray. Most notably, Constellation Brands (which controls brands such as Corona and Modelo) invested $4 billion to take a 38% stake in Canopy.

Big alcohol has been deeply intertwined with the Canadian cannabis industry for years. But now, the beverages are actually available for consumers. We analyze all of the cannabis beverage brands, products, and marketing strategies that have been launched in Canada so far (or are coming very soon).

Product details: Tweed’s ready-to-drink beverages are named by the strain that the infusion was made along with the medium that the cannabinoids were infused into. Currently available in three options – Penelope and Tonic (2 mg of THC and 1.5 mg of CBD), Bakerstreet and Ginger and Houndstooth, and Soda (which both contain 2mg of THC per can).

Tweed also offers “Tweed Distilled Cannabis” shots of their proprietary clear liquid cannabis. Packaged in 150mL bottles, this concentrated product can be mixed with any non-alcoholic beverage or enjoyed “neat” or “on the rocks”, similar to how hard alcohol is consumed. These Distilled Cannabis mixers are flavoured with the same three core strains and contain a total of 10mg THC each (with Penelope also having 7.5mg of CBD present). These concentrated products are promised to be available for sale early this year.

Branding details: Tweed is Canopy’s flagship recreational brand and is one of the most well-established names in the global cannabis market. Tweed is a proudly Canadian brand that aims to offer products for every segment of the cannabis consumer.

Product details: Canopy’s Deep Space beverages are smaller carbonated drinks with a dark colouring and a bold, full flavour. Offered in a 222ml can and contains 10mg of THC (the highest THC per serving allowed by Health Canada).

Branding details: Deep Space is an entirely new brand developed by the Canopy Growth Corporation for the drinkable market. Deep Space’s branding and marketing materials feature psychedelic optical illusions and outer space-inspired imagery. Canopy brands these products as “small, potent and ready-to-go” as well as being a “deep, dark and mysteriously full-flavoured carbonated beverage”. The brand’s eerie and vague slogan is: “THIS IS OUR GREEBLE. IT HAS NO BEGINNING AND NO END. THE LOOP IS INFINITE.”. This branding is definitely unique in the cannabis space.

Branding details: Quatreau is an entirely new brand developed by the Canopy Growth Corporation for the drinkable market. These beverages are reportedly targeted at “wellness-focused beverage enthusiasts”. Quatreau is an approachable, entry-level introduction to cannabis drinkables. The brand invites you to “calm up” with the refreshing flavours of their sparkling water. Quatreau brands these four drinks as a “line of refreshing, naturally flavoured cannabis-infused sparkling water beverages that help us take ownership of our decision to pause, sip, and move on to the next big thing.” Positioned as a beverage for busy individuals who are “trying to do it all”.

Branding details: Houseplant is an existing brand in the Canopy Growth Corporation’s portfolio that has now expanded its product offering to include two sativa cannabis-infused sparkling waters. Houseplant is a brand launched by Seth Rogen and Evan Goldberg. Houseplant currently offers dried flower (branded by Sativa, Indica and Hybrid) and soft gel caps, but will be purveying drinks very soon. Houseplant is a nostalgic retro brand that focuses on the aesthetic of the 70’s and the 80’s using imagery such as VHS boxes and record players.

Branding details: Haven St. is a unique recreational focused premium brand offered by Terrascend Corp. Their brand was set up as a “neighbourhood”, with different addresses (ranging from 100-500) that help you understand what to expect from each of their products. For instance, the “100’s” products promote “peace”, while the “400’s” are titled “drift”. These teas are currently available in all five of their collections. Haven St believes that consumers should feel conﬁdent and empowered when it comes to cannabis, so they designed their “Address System” for easy exploration. The ﬁve blocks on Haven St. tell a unique story, with the intensity of the psychoactive experience increasing from The 100s to The 500s.

Product details: They offer three sparkling beverages, each infused with 10mg of CBD. Available in Lemon Lime, Mango Passionfruit, and Dragon Fruit Watermelon. Packaged in individual 269ml cans and 4-packs. All of these products contain small trace amounts of THC.

Branding details: Everie is a brand presented by Fluent Beverages. Everie positions its products as a break from it all, offering consumers a moment to refresh themselves. Everie invites you to “Keep Good Going” with their CBD-infused beverages.

Product details: Basecamp and Summit are white-label branded drinks offered by The Valens Company and A1 Cannabis Company (a subsidiary of Iconic Brewing). Basecamp is a CBD Iced Tea with 15mg of full-spectrum CBD extract per 355ml bottle and zero THC, zero psychoactive effect. Summit is a THC Citrus Water containing 2.mg of THC per 355ml bottle and made using lemon and grapefruit. Both of these beverages will soon be available in “Drink Drops”, which are small concentrated bottles of THC and CBD that can be infused into any non-alcoholic beverage. These products were developed using the SōRSE by Valens emulsion technology which transforms cannabis oil into water-soluble extracts while eliminating cannabis taste, colour, or smell. These beverages have a fast onset time, significantly reduce offset time, increased bioavailability of cannabinoids, and are stable enough to achieve more than a one-year shelf life.

Branding details: Basecamp and Summit are two new products/brands launched specifically to offer beverages. The parent brand is A1 Cannabis. The branding all revolves around mountain climbing and achieving elevation. The “summit” of a mountain is the “highest” point, making for a great name for a high THC beverage. The “base camp” at a mountain is level and “grounded”, lending to the CBD only beverage name.

Product details: The product is currently offered in THC, but will soon be available in CBD and a mix of both cannabinoids. The THC version contains 10mg of THC, the CBD version will contain 1mg of THC and 10mg of CBD and the mixed version will contain 2.5mg of each cannabinoid. The powder itself is odourless, flavourless, and calorie-free. The powder is made with a simple list of ingredients: sorbitol, modified corn starch, organic modified coconut oil and organic cannabis oil.

Branding details: TGOD brands these products as an easy and discreet way for consumers to create their own infused beverages or edibles anytime, anywhere. This is the ultimate convenient method of cannabis beverage (or edible) consumption. The Green Organic Dutchman is a premium certified organic cannabis producer that grows in rich, Canadian soil to create cannabis that is clean and natural.

TGOD was the recipient of the award for the Best Packaging Design in Canada in the 2019 ADCANN Advertising Awards.

Analysis & The Future of Cannabis Beverages in Canada

Like most 2.0 categories in Canada, the future of cannabis beverages is yet to be seen. There are still several brands and products that are yet to be launched. Companies such as Province Brands and Hill Street Beverage Company, whose entire business is the production of infused drinkables, have yet to bring offerings to the market.

Some consumers cite that the THC limits on these beverages render them too expensive for the amount of psychoactive effect they can produce. It will be interesting to note if Health Canada decides to change these limits on edibles and beverages to help licensed companies compete with the illicit market.

The concept of quality in the beverage market is still developing. Different cannabis beverage consumer segments are emerging, which will hopefully be satisfied by differentiated niche offerings from brands. It will be incredibly exciting to watch this category develop over the coming years. Cheers!

Which of these cannabis beverages have you tried or want to try?

How To Launch a Cannabis Product in Canada

How To Name A Dried Flower Product: A Quick Guide